The planning was last minute, but team Martiin actually managed to meet up at Stockholm Arlanda airport last Wednesday for a continued flight to Toulouse via Amsterdam. My energy levels were thoroughly drained by a bad cold, I had been coughing for a week already. In that same week I had also dragged myself through my dissertation in a haze of sleeplessness and fever. At least I got it done, but things were not ideal for racing long days of enduro and sleeping in tents.

Anyway, we finally reached Toulouse and stuffed all our bikes and stuff in the roomy posterior of a rental Kangoo. Brilliant car by the way, looks a bit funky but big on the inside and small on the outside. We set the GPS on Millau and drove off darting through the french traffic to the mighty sound of the howling wind and the tiny diesel engine. After three hours we met team Velozine at camping Millau Plage, our base camp for the week. After setting up the tent, putting the bikes together and such technicalities we were off to sleep.

The next day we took a ride on the local trails to wear off the cobwebs and get a feel for the dirt and rocks. It was dry, sunny and windy, and the surface was dry and loose. Plenty fun, we did a couple of the marked enduro trails and ended up on the other side of the big bridge, so we got the privilege to ride under it on our way back to town. Since I was on very strong cough medicine indeed, I had to drink soda instead of post ride beer, which really broke my heart. Watery french beer on a cafe after the ride is an integral part of the experience for me, almost as much as croissants and baguettes for breakfast.

Sampling the local trails above Millau, photo by Martin

My health felt like it was improving, but I still had no power in my legs and kept coughing a lot. My plan was that i I took the next day to rest, I would be fit for the race.

After a day of just hanging out in the morning, and registering for the race in the afternoon with accompanying bus shuttle to the first race campground, I still felt like shit after dinner. Hitting the sack at 9pm I was hoping for a speedy recovery, next day was race day, the first of three.

Team Martiin team picture from the race sign up. Blatantly stolen from http://www.endurotribe.com/2014/05/portfolio-biivouac-millau-2014-larrivee-des-equipes/

Unfortunately, there was no recovery. I don't remember much of the first day of racing, it was all a blur of pain and coughing. After every special stage (and there were apparently four of them) I had to sit still or lie down for minutes just to regain some kind of composure. There is a point, especially in a long stage, where racing stops being about beating the clock, and is more about coaxing oneself to not stop, keep going and not loose concentration and go cartwheeling down the mountainside. Last time I experienced it was on the longest stage of the Biivouac 2013, a 20min stage in cold rain riddled with greasy switchbacks. The time before that was back in 2012 on Donkey Darko on the Trans Provence, which I think is around 900m of descent, a never ending technical challenge. This time I had that feeling on every stage, all day. I was really digging deep just to get my ass around the course, and all the time I had Martin in front going at 80% and still having to wait for me. That can really kill a man's ego.

After what seemed like forever, we just had a big liaison stage between us and camp. It turned out to be a long day, I think around 8 hours total, but probably not more than 6 in the saddle since we also spent a bunch of time in shuttles or waiting for shuttles. In camp I promptly went to sleep, woke up to eat and went to sleep again. I did not even notice when Martin went to bed after dessert and standings had been presented. In the morning I found out we were 15th out of 48 teams. Considering the circumstances, really not bad at all.

The second day I felt a bit better, and at least had some energy to get through the specials. I even might have pedaled out of a corner or two. Unfortunately we lost the best part of 3 minutes going off the course due to a miss in the taping, which really sucked. I felt like we could climb the standings a bit now that I had more energy, but we lost all the time we made in the other specials and ended up 15th again. I was still off to bed at 9.

The third day I felt like crap in the morning and during the first liaison stage, but a bit of adrenaline in the first special was all I needed to get back to the same feeling as the day before. I was still coughing my lungs out during every remotely flat pedaling section of the specials, but at least my mental energy was better and I actually rode my bike instead of just being a passenger trying to survive until the finish line. We rode at a fairly fast but above all safe and consistent pace the whole day, there was a lot to loose and not so much to gain by pushing too hard. Crossing the finish line in early afternoon I was very happy to have made it through, and with at least a half decent result. We ended up 14th in the general classification, and I think if we had both been healthy and not lost time chasing up the wrong trails, we had a top ten in us. Maybe next year... 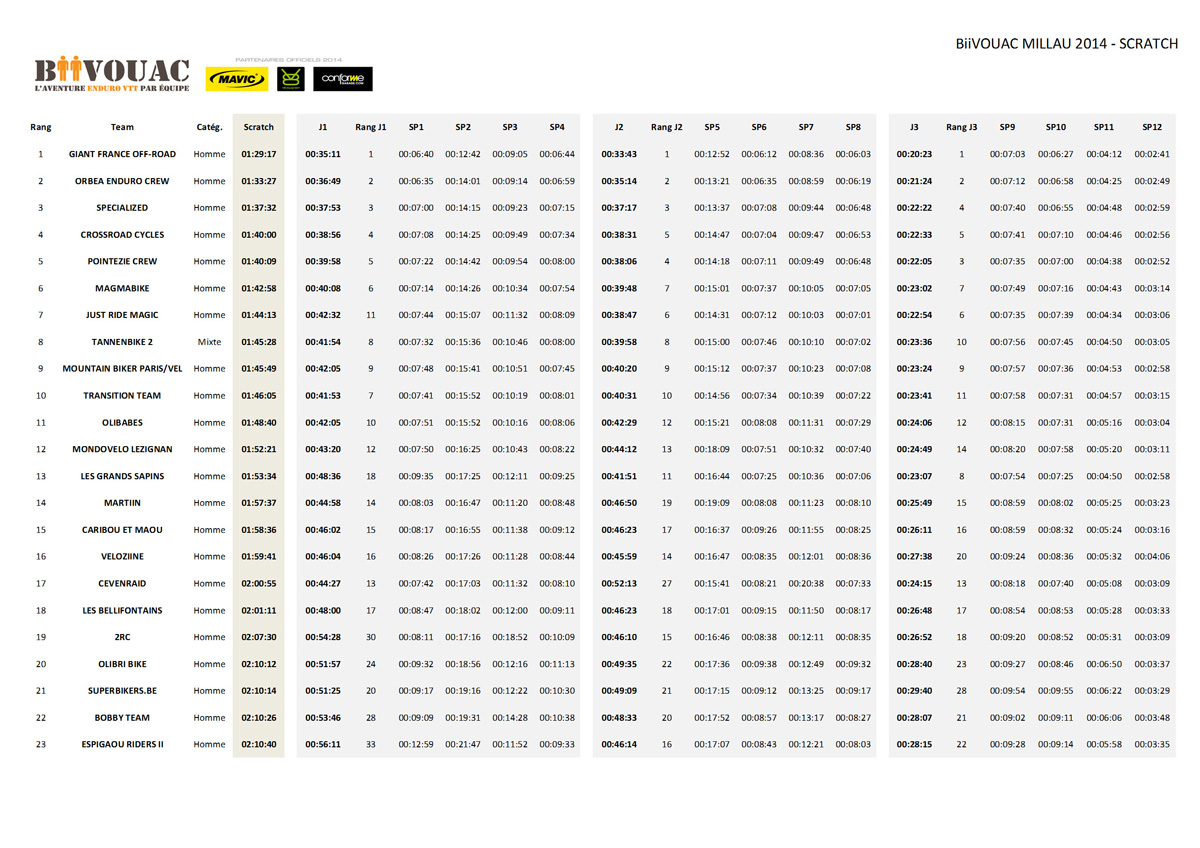 Times for the first half of the field, from from http://www.endurotribe.com/2014/05/biivouac-millau-2014-les-resultats-complets where the complete results for all teams can be found as well

Results aside, the Biivouac was as always a great event. The food is all local, everyone speaks french and it is a bit of an adventure every time. One just has to go with the flow and do it the french way, I love it. If you want detailed information in English about what will happen during the day, how the special stages will be or what is on you plate, though shit, because there won't be any.

Logistics ran a bit more smoothly this year compared to last, subtracting a bit to the lovely chaotic feeling we got last year. The area around Millau and Gorge du Tarn is very scenic, liaisons for the most part beautiful and the specials were on really fun and varied trails. Usually they start off open, loose and rocky and become loamy, rooty and tighter with switchbacks the further down one goes. The bike worked really well with no problems whatsoever, not ever a flat. Tire choice felt good with a Minion 2,5 exo Maxxerra on the front and Onza Ibex 2,4 in the rear, both tubeless.

Big thanks to Martin for the patience to wait for some ill crippled sorry excuse for a rider, and to Greg Noce, Quentin Chevat and the rest of Enduro Tribe/Wildtrack for putting on an awesome race, hats off and I hope to see you again next year with more strength and less germs.

We have had a few rainy days here in the north of Sweden. When everyone else was either at the EWS in the Tweed valley, the…

I got caught out again. Same root in the same corner as umpteen times before. Time to grow some talent I guess. Bike on its side,…